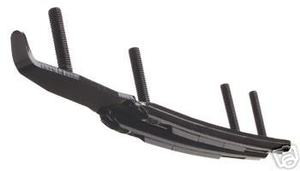 You are Looking at a brand new Dooly Carbide Runners made by Woodys (DY6-6580) for Yamaha snowmobiles. The features of the runner are it has 6" of 60 degree Carbide, it is a 7/16' diameter flat top runner that is  designed to bolt onto OEM Skis, has more positive cornering control, increasing as the ground gets harder. It is very effective on ice. It has 1-1/2" wear plate at the end and hardweld at the front.Bolt size is 3/8"-16. the runners will decrease darting of skis and has 2 seperate line of carbide that contact the snow surface. The Runners are sold Each.

Shipping is added to the purchase price with the shipping calculator.Please feel free to ask questions prior to buying. My email address is dave@davescycle1.com  .  The buyer is to pay actual shipping expenses. I will combine multiple purchases for a reduced price on shipping whenever possible.I will  email you letting you know that payment was received and the item was shipped.New York State residence will be charged 8.00% sales tax.

This product hasn't received any reviews yet. Be the first to review this product!